Skip to main content Skip to search
You are here

As the COVID-19 curve starts to flatten in Australia and New Zealand, people are rightly wondering how we will roll back current lockdown policies. Australia’s federal health minister Greg Hunt says Australia is looking to South Korea, Japan and Singapore to inform our exit strategy. New Zealand is relaxing some measures from next week.

A long-term solution – a vaccine – is many months, probably years, away.

In the meantime, we must rely on social distancing policies to contain the epidemic – and begin to accept the idea that an “exit strategy” may really look more like a more flexible version of lockdown.

What can we learn from other countries?

Total lockdown is not a prerequisite for success, but nonetheless seems to be where most countries are going.

In a study of more than 100 countries, currently under peer review, my colleagues and I find that on average, stricter policies (as measured by what we called a “stringency index”) lead to lower death rates after two to four weeks. 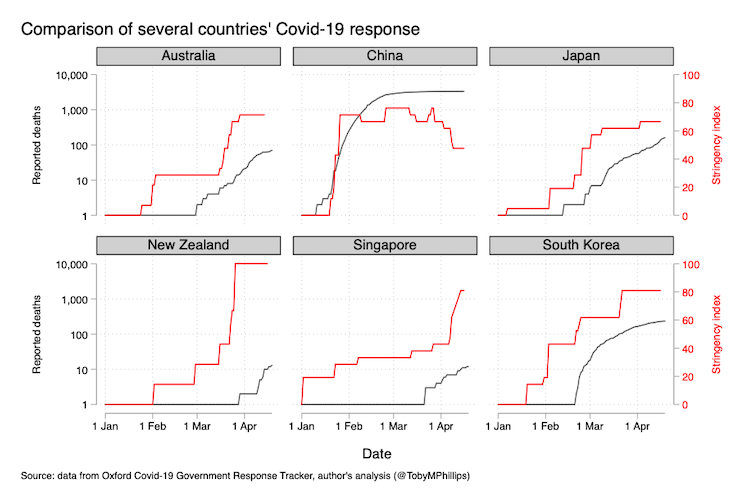 When looking at most of the other countries mentioned by Australian health minister Greg Hunt we see that they are not exiting lockdown but are, in fact, getting stricter.

Indeed, of Minister Hunt’s countries, Japan is the only one that has not escalated its policies recently. It has, however, seen an uptick in daily deaths over the last week, going from an average of five deaths per day to 20.

(COVID-19 deaths is a better measure of epidemic severity than case numbers, as case numbers are vastly underestimated in some countries. For instance, some researchers have estimated that the United Kingdom might have over 10 times more cases than reported.)

South Korea, Hong Kong and Singapore all initially managed to keep their curve flat through aggressive testing, a small amount of targeted closures, and voluntary social distancing by citizens.

Even though they aren’t exiting lockdown, there are still useful lessons: despite being officially “open” at the time, these countries had slow infection growth rates over February and March.

We should add Taiwan to the list of countries to watch. They seem to have the epidemic under control – or close to it – without a national lockdown. The key seems to have been rapid tracing and quarantining, community measures (such as temperature testing checkpoints), and citizen compliance. They have been preparing for a major pandemic since SARS in 2004.

When should we start to loosen the rules?

Last week the Australian prime minister Scott Morrison outlined three things Australia needs to have before restrictions can be lifted:

Broadly speaking, these mirror the criteria set by the WHO director general, Dr Tedros Adhanom Ghebreyesus, three days earlier. Tedros also included that epidemic transmission should be under control and communities must be adjusted to the “new normal”.

On these criteria, Australia is one of the leading countries in the world. For testing, South Korea used to be at the front of the pack, but now we’ve conducted more tests per person than most countries (although not as many as New Zealand or Italy).

In terms of controlling the epidemic, we are averaging around one or two deaths each day. Australia ramped up its policy approach three and half weeks ago; and now we are seeing the curve start to flatten.

So we’re approaching the point where it makes sense to start thinking about loosening rules. But there aren’t really any examples to learn from. China has made the most significant reductions in policy strictness, but it is still too early to assess the impact of this.

Ultimately, we can’t think of lockdown as a national on-off switch. Just as there is an epidemic curve of cases, so too there is a curve of policy responses. Over 200 Australian economists signed an open letter on Monday urging the government not to roll back too far too quickly.

All eyes will be on New Zealand as they reduce their lockdown level next week. It is the first step of a slow and measured roll back – many aspects of a “lockdown” will remain. Some businesses must stay closed. People must still stay at home unless working or making essential trips.

Until a vaccine arrives, containing the virus is about reducing how often people come into contact and how closely – as we saw from Taiwan, a formal lockdown may not be necessary. Data from firms such as Apple and Google can serve as a proxy for people’s movement and likelihood of coming into contact with others. 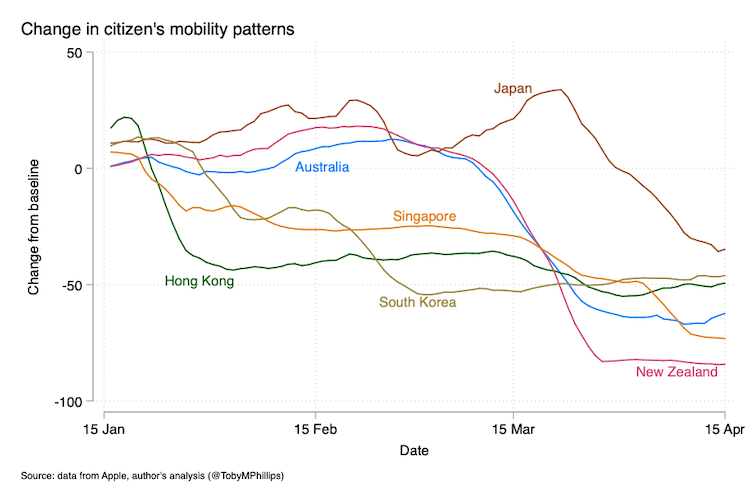 As Australia was heading into the pandemic, the data in the chart above suggest it took blunt lockdown measures (late-March) for people to reduce their contact with each other (for example, Bondi Beach was closed after crowds gathered there in defiance of social distancing recommendations).

Conversely, individual Singaporeans and South Koreans reduced their level of interaction back in February, without the strict lockdowns that are only just now being implemented in their countries.

Exiting the lockdown doesn’t mean going back to business-as-usual. Under the “new normal” we will need people to behave like Singaporeans and South Koreans did in February: voluntarily limiting contact. Hiking will be back on the cards; big barbecues might not be. 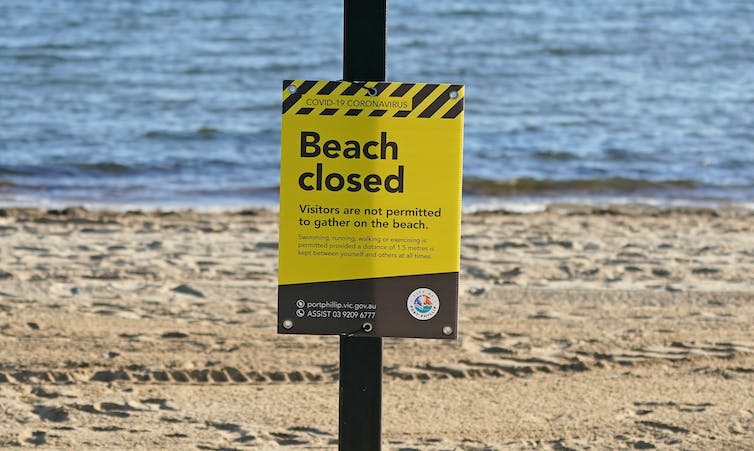 What’s more, we will need to figure out how to scale the response up and down as needed – possibly several times and in ways you might not expect.

We might need to return to full lockdown in a specific place when a flare-up is detected there. This requires new policy instruments to flexible and locally switch areas on and off – not the whole country – to deal with isolated outbreaks.

We can’t remain in a nationwide lockdown forever. If people can voluntarily practise the behaviours that slow the virus’ spread, then the formal lockdown can relax. But life can’t return to how it was before. At least not yet.

Your commitment made this happen.
Thank you!
Navigation
Main menu