Skip to main content Skip to search
You are here

Remdesivir explained – what makes this drug work against viruses?

With the FDA approving Gilead’s Remdesivir as an emergency use treatment for the most acute cases of COVID-19, many people are wondering what type of a drug it is.

Remdesivir is a member of one of the oldest and most important classes of drugs – known as nucleoside analogue. Currently there are more than 30 of these types of drugs that have been approved for use in treating viruses, cancers, parasites, as well as bacterial and fungal infections, with many more currently in clinical and preclinical trials.

I am a medicinal chemist who has worked in design and synthesis of these important drug treatments for over 30 years. I have written numerous reviews over the years about these drugs and their structure and function, and as a result have had many inquiries lately from friends, family and others not in the field asking me to explain what exactly is it about Remdesivir that makes it so effective, but also why it is so interesting. Understanding why means digging into the biochemistry of this class of drugs.

The reason nucleoside analogues and a similar group called nucleotide analogues are so effective is that they resemble the naturally occurring molecules known as nucleosides – cytidine, thymidine, uridine, guanosine and adenosine. These are the essential building blocks for the DNA and RNA that carry our genetic information and play critical roles in our body’s biological processes.

Slight differences in the chemical structure of these analogues from naturally occurring compounds make them effective as drugs. If an organism like a virus incorporates a nucleoside analogue into its genetic material, rather than the real thing, even small changes to the structure of these building blocks prevent the regular chemistry from happening and ultimately foils the ability of the virus to replicate.

The basic structure of a nucleoside includes a sugar group and a base (A, C, G, T or U), and in the case of a nucleotide, a group containing a phosphate which is a collection of oxygen and phosphorus atoms. 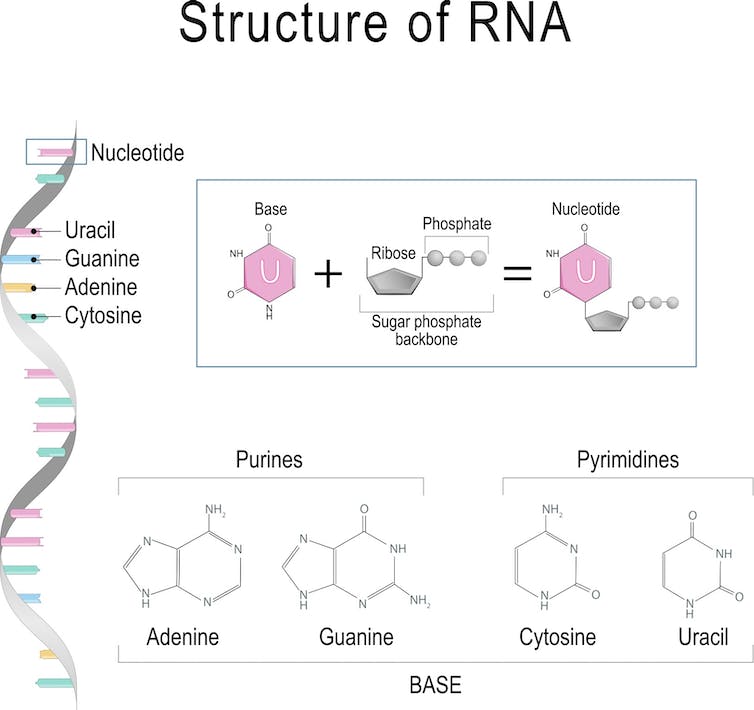 How does Remdesivir work as antiviral therapeutic?

This activity occurs because nucleoside/tide analogues mimic the structure of a natural nucleoside or nucleotide such that they are recognized by, for example, viruses. Due to those structural modifications, however, they stop or interrupt viral replication, which stops the virus from multiplying and infecting more cells in the body.

As a result, they are known as direct-acting antivirals, and this is the case for Remdesivir, which works by blocking the coronavirus’s RNA polymerase – one of the key enzymes that this virus needs to replicate its genetic material (RNA) and proliferate in our bodies. Remdesivir works when the enzyme replicating the genetic material for a new generation of viruses accidentally grabs this nucleoside analogue rather than the natural molecule and incorporates it into the growing RNA strand. Doing this essentially blocks the rest of the RNA from being replicated; this in turn prevents the virus from multiplying.

The drug Remdesivir is basically an altered version of the natural building block adenosine – which is essential for DNA and RNA. Comparing the structure of Remdesivir with adenosine, one can see there are three key modifications that make it effective.

The first is that Remdesivir, as it is administered, is not the actual active drug; it is actually a “prodrug,” meaning it must be modified once in the body before it becomes an active drug. Prodrugs are used for many reasons, including protecting a drug until it reaches its site of action. The active form of Remdesivir contains three phosphate groups; it is this form that is recognized by the virus’s RNA polymerase enzyme.

A naturally occurring nucleotide (left) which is a building block of RNA and DNA and Remdesivir (right) which is a variation on its natural counterpart. Katherine Seley-Radtke, CC BY-SA

The second important modification on Remdesivir is the carbon-nitrogen (CN) group attached to the sugar. Once Remdesivir is incorporated into the RNA growing chain, the presence of this CN group causes the shape of the sugar to pucker, which, in turn, distorts the shape of the RNA strand such that only three more nucleotides can be added. This terminates the production of the RNA strand and is what ultimately sabotages the replication of the virus.

The third important structural feature which makes Remdesivir differ from adenosine is the change of one particular chemical bond on the molecule. Rather than a bond linking a carbon and nitrogen atoms, chemists replaced the nitrogen with another carbon, creating a carbon-carbon bond. This is critical to the success of this drug because coronaviruses have a special enzyme that recognizes unnatural nucleosides and clips them out. But by changing this chemical bond, Remdesivir cannot be removed by the enzyme, allowing it to stay in the growing chain and block replication.

Remdesivir originally was found during a drug discovery program at Gilead to search for inhibitors of the hepatitis C virus, which is another RNA virus. Although Gilead ultimately selected a different nucleoside analogue for treatment of hepatitis the company tested the drug to see if it was effective against other RNA viruses. Remdesivir exhibited potent activity against Ebola and Middle Eastern respiratory virus, among others.

Now the drug is being tested against the SAR-CoV-2 virus in the first clinical trial launched in the United States.

While these results are preliminary, there are a plethora of clinical trials underway across the world. Regardless, a certain amount of caution is still needed. As noted by Dr. Anthony Fauci on NBC’s “Today” show, “the antiviral drug Remdesivir is the first step in what we project will be better and better drugs coming along” to treat COVID-19, but cautioned, “This is not the total answer.”

I share this view with many other scientists in the field. No matter what those results ultimately show, Remdesivir will mostly certainly be part of a cocktail of drugs, just as is standard for treating other viruses such as HIV and hepatitis C.

A combination, or cocktail, of drugs will provide a more effective and more complete therapy that blocks the virus from replicating. The other benefit of such a drug cocktail is that it lowers the chance the virus will develop resistance to the therapy. In the meantime, these early results for Remdesivir are proving to be an important source of hope for many of us across the world as we wait for this pandemic to subside.

Katherine Seley-Radtke, Professor of Chemistry and Biochemistry and President-Elect of the International Society for Antiviral Research, University of Maryland, Baltimore County

Your commitment made this happen.
Thank you!
Navigation
Main menu